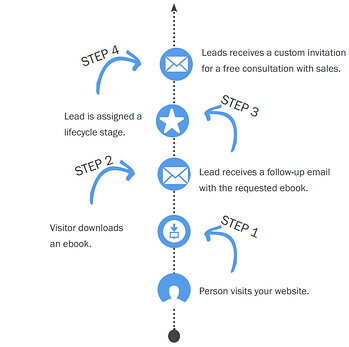 Thanks to the Internet's growth, specifically in online search, inbound marketing has been replacing traditional advertising as a way to get customers.

Simply put, inbound marketing is a philosophy that involves attracting people who are already looking for your products and services rather than broadcasting messages to everyone (including those who have no interest in what you're selling).

Inbound marketing tools include search engine optimization, content that delights and converts people into leads, and workflow strategies that turn leads into customers.

But the Internet changed all that: it taught people they could find what they needed, when they wanted it. And that, in turn, created similar expectations among consumers.

Why the Shift? Changes in Consumer Media Consumption

There are several shows on network television that are unambiguous successes and bring in plenty of viewers. Advertisements during these shows can be remarkably effective. But what about the consumers who are turning to ad-free services like Netflix in order to get their entertainment?

Ditto with newspapers. Newspaper readership is dropping as people check online for news: it's faster, cheaper, and allows providers to send consumers news that actually interests them, rather than the one-size-fits-all approach of classic techniques.

The bottom line is that changes in media have rendered most traditional advertising ineffective, at least for small-to-medium-sized businesses, and especially if that's the only marketing the company is doing. Companies like Nike and Coca-Cola, however, still do outbound marketing to a certain extent--e.g. they run ads on TV shows--but their ad spend has gone down, and their goals are different than it was thirty or forty years ago. Today, it has less to do with converting people into customers and more to do with branding. For the purpose of this article, we're thinking in terms of all the other businesses out there.

One of the most common answers to a casual question is "Google it." This simple statement is far more than it appears (starting with an acknowledgement by people that they do not know everything). However, it goes deeper than this, because it also reflects an assurance that the information is available if they want an answer and that obtaining the information is so easy that people should do it themselves instead of bothering others.

This is where inbound marketing enters the picture (Note: at Proforma Durkee, we use the phrases inbound marketing and digital marketing interchangeably). Historically speaking, advertising to somebody who doesn't want to buy a product is a losing proposition at best. But society's willingness to search for information means that many customers will gladly come to you if you can place yourself in their path. And that's exactly what inbound marketing does.

Inbound marketing starts by providing something of value to the consumer, often in the form of information or instruction, with an encouragement to learn more and buy the tools they need to accomplish their goal.

Companies are turning to inbound marketing because they have discovered that it works when done correctly. Quite frankly, no business wants to waste thousands of dollars on advertisements being sent to people who will never become customers. Inbound marketing focuses on targeting the people who will buy, and even if more money is spent to get each paying customer, the total cost of advertising tends to be sharply reduced because of all the waste that's been cut.

Looking towards the Future

The advertising landscape is always changing as companies uncover better ways of reaching their customers. Inbound marketing isn't going to go away in the near future. The ability to gather information on consumers, track behavior patterns, and form a marketing plan based on those patterns is simply too valuable to give up unless something better comes along (and we're not going to see anything better until technology has advanced much further). Individual aspects, such as how people buy and ship things, may change, but quality information and service have never gone out of style.

However, if you're going to use inbound marketing, then you need to go all in. Traditional forms of advertising will still work for some businesses, but they should be considered a secondary approach at best: a method of reinforcing your brand, not a way of converting your customers. A weak effort won't cut it when your competitors are going all-out to succeed, but a little creativity and a willingness to learn can help you earn the rewards that inbound marketing offers.